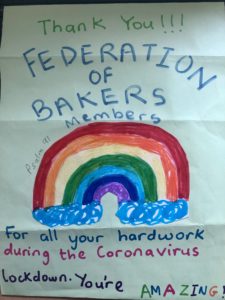 We received this in the post late last week. It is a note of thanks to the Federation of Bakers for all your hard work during the pandemic. It’s from Grace aged 9 a year 4 pupil at Haberdashers’ Askes’s school in Erith South East London.

The Weekly News/Covid 19 Update below includes news from HSE, HMRC and CBI.

Have a good week.

CBI Update: On Friday, the Prime Minister announced that COVID-19 restrictions in England will be eased under plans for a “significant return to normality” by Christmas. Under the new guidelines, people may use public transport for journeys immediately, while advice for employers will change from 1 August. Companies will have more discretion to bring staff back to workplaces if it is safe to do so, but any plan for returning to work must ensure employees are safe and must not risk an infection spike. Businesses have made monumental efforts to protect their workforce, but concern about infection is still high. Some jobs cannot be done from home. Some homes are not good places to work from. And low demand and footfall on many high streets are leaving firms struggling, driving up unemployment.

This announcement marks a welcome change in tone but changing behaviour and confidence will take time. Close collaboration between government, employers, and unions – alongside excellent employee engagement and continued improvements in childcare, transport, and testing – will be the building blocks for success. Businesses will now be closely examining government guidance. Clarity and consistency must guard against confusion.

Earlier in the week, we heard that from 1 January 2021, freedom of movement is ending as the UK adopts a points-based immigration system whereby EU and non-EU citizens will be treated equally when applying for visas. Added to this, employers will need to apply to the Home Office to become an approved sponsor if they wish to recruit workers from outside the UK. This new points-based system could support the economy and retain public confidence, and the announcement has positives when it comes to attracting international students and the highest skilled workers. But it will struggle to reflect genuine needs in communities until it values an individual’s contribution beyond their salary and avoids a false choice between hiring from overseas or investing in the existing workforce. Both are needed to drive the economy forward.

When the system launches in January it will be in a very different labour market to what was expected earlier this year. This is a reminder that it must be flexible to be fit for the long-term. A regularly reviewed shortage occupations list, with promises of further flexibility, will be vital for the effectiveness of the new system.

Also this week, the CBI’s Infrastructure and Energy team published a paper titled ‘Commuting beyond the coronavirus’, in partnership with KPMG. The research assesses what the recent changes in working practices and the use of public transport means for business and government going forward. As businesses look to return to some form of on-site work, they are aware that many employees will not return to their former travel patterns, and that staff will have new expectations for flexible, reduced carbon, and COVID-secure travel. The paper not only sets out the initial steps businesses, the government and transport operators will need to take to keep services running over the months ahead, but also looks beyond the immediate crisis to consider what changes can be made now to accelerate improvements to the journey to work for all.

Live webinars offering more support on changes to the scheme, and how they impact you, are available to book online – go to GOV‌‌‌‌.UK and search ‘help and support if your business is affected by coronavirus’.

Please check GOV‌‌‌.UK and join one of our webinars if you need further help. This will leave our phone lines open for those who need them most.

Make sure your data is right

It’s important that you provide the data we need to process your claim. Payment of your grant may be at risk or delayed if you submit a claim that is incomplete or incorrect.

If you are claiming for 100 or more employees, please use our standard template to submit your employees’ details. It is important that you submit the correct data (including National Insurance numbers) in the correct format.

You can find this template by searching ‘Job Retention Scheme template download’ on GOV‌‌‌‌.UK.

We wrote to you recently about the introduction of the Job Retention Bonus – a one-off payment of £1,000 to employers who have claimed under CJRS for each furloughed employee who remains continuously employed until at least 31‌‌‌ ‌January 2021.

More information about this scheme will be available on 31‌‌‌ ‌July.

CJRS grants are to cover the costs of your furloughed employees’ wages (and related payroll taxes, National Insurance and pension contributions until 31‌‌‌ ‌July). We may withhold or recover grants if they are claimed based on dishonest or inaccurate information.

We’re contacting a number of employers at the moment to check that they have claimed the correct amount.

If you have made an incorrect claim that meant you claimed too much, you can let us know as part of your next online claim without needing to call us. If you have made an error and do not plan to submit further claims, or you have claimed less than you were entitled to, please contact us by searching ‘Contact HMRC’ on GOV‌‌‌‌.UK.

Protect yourself from scams

Stay vigilant about scams which may mimic government messages as a way of appearing authentic and unthreatening. Search ‘scams’ on GOV‌‌‌‌.UK for information on how to recognise genuine HMRC contact. You can also forward suspicious emails claiming to be from HMRC to phishing@hmrc.gov.uk and texts to 60599.

I hope this information helps you and your business, and we’ll continue to keep you updated on scheme developments over the coming weeks

Parliamentary Brief Update: MPs continued to press the Government this week on its commitment to upholding UK food standards, as more detailed information about the new Trade and Agriculture Commission were announced. In anticipation of an announcement shortly on the next phase of the Government’s obesity strategy, the Government is also facing increasing pressure from health campaigners keen to  see it implement in full the proposals in previous chapters of its obesity action plan on which it consulted last year

Trade and Agriculture Commission: The Government has announced the membership, timescale, terms of reference and powers of its new Trade and Agriculture Commission (ATC)  The ATC will “consider the policies that the Government should adopt to secure opportunities for UK farmers, ensure the sector remains competitive and make sure that animal welfare and food standards are not undermined.” It will be set up for 6 months and submit an advisory report at the end of its work which will be presented to Parliament by the Department for International Trade (DIT). The International Trade Minister, Greg Hands, told the Shadow International Trade Secretary, Emily Thornberry, that the ATC “has no remit to discuss food and feed safety regulation, and policy across the whole food chain, as that is regulated by the Food Standards Agency, Food Standards Scotland and the Department of Health and Social Care.” The Government continues to insist, however, that it will not compromise the UK’s high environmental protection, animal welfare and food safety standards. The Defra Minister, Victoria Prentis, has also confirmed to Tim Farron that the Animal and Plant Health Agency and Port Health Authorities will continue to deliver import controls for animals, plants and their products after the end of the EU-UK transition period.

Brexit Update: The Government is to launch a new public awareness campaign to help prepare the UK for the end of the Brexit transition period. It said the campaign will set out the actions businesses and individuals need to take to prepare for the end of the transition period on 31 December 2020.  The key “Check, Change, Go” message will direct people and businesses to a checker tool which will help them identify any outstanding measures required.

Commons Northern Ireland Committee reports on Brexit border arrangements
The Commons Northern Ireland Affairs (NIA) Committee has published an inquiry report which criticises the UK Government’s “overly political approach” to post-Brexit trading arrangements. It says that the Government’s  apparently “limited understanding of how business works” is leaving business ill prepared for the end of the transition period on 31 December. The Committee calls for firms to be told how the Northern Ireland Protocol part of the Brexit deal will operate by 1 October and it recommends that businesses should be compensated if the “unfettered access” to the British market promised by Ministers is not delivered. NIA Committee Chair, Simon Hoare said “the Government needs to stop gambling with the future of business and of the people of Northern Ireland.”

New post-Brexit UK immigration system
The Government has published more detailed information about the post-Brexit, points-based immigration system.  The new arrangements come into effect from 1 January 2021, once freedom of movement between the UK and the EU has ended.

The government report concludes that:

HSE Guidance: An online tool, workbook and posters to help you manage the risk of work-related stress in your organisation